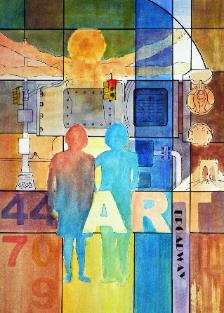 Ted Lawson is a contemporary watercolor artist who started his art career in high school in Phoenix, Arizona.  Even though Ted was good in high school art he chose engineering school over art school.  Through his career in engineering converting crude oil into gasoline and jet fuel he studied with nationally known watercolor instructors Gerald Brommer, Tony Couch and Fred Graff as well as with his mentor, Bette Elliott.

Ted creates art using “the things that people see and use every day” as his inspiration. His ideas involving common everyday scenes or objects spring from his extensive foreign and domestic travels as well as glimpses of New York City. Ted continuously strives to accomplish the goal of creating something that is entertaining and thought provoking for other people to look at and enjoy.

Born in Terre Haute, Indiana, Ted resides in Canton, Ohio with his wife Patricia, a former high school Spanish teacher.  Their one daughter, Emily is a theatre attorney.  She and her husband Guy work in the Broadway production niche in Manhattan.   Ted is a signature member of the American Watercolor Society, the Ohio Watercolor Society and the Akron Society of Artists.

A friend once remarked to Ted about his two disparate careers, one in art the other in engineering by asking how an engineer became a watercolor artist.  Ted replied, “Consider Leonardo DaVinci”.