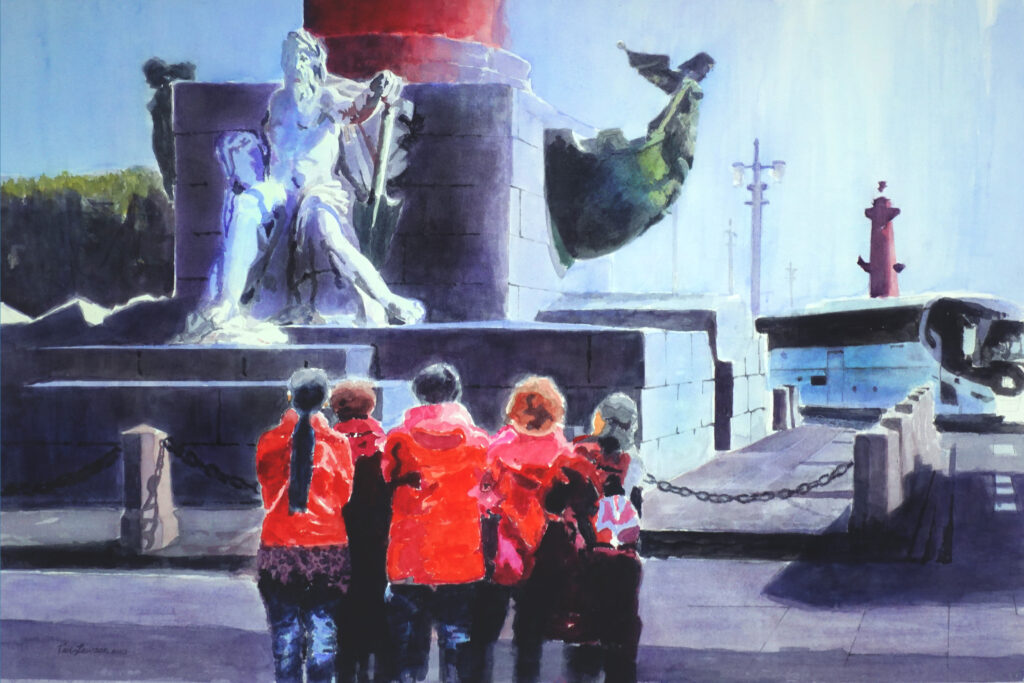 Travel in Europe and Asia provides so much to my world view.  The Baltic states and Finland and Russia provided so many opportunities to add to my portfolio of people places and things.

The painting, Monumental, came about as my wife and I and our traveling partners arrived from Helsinki Finland by high speed train in Saint Petersburg Russia where we were greeted by two rostral columns on the banks of the Neva river.  As much as the open arches of the Palace Bridge the dome of St Isaac’s Cathedral or the spires of the Admiralty and the Ss Peter and Paul Cathedral, these columns are a symbol of Saint Petersburg.

These columns commemorate significant naval victories by Russia’s navy.  The figure on this subject monument represents one of the four major rivers of Russia.  Each monument is graced with two such figures.  Each column contains more than one ship’s prow which represents ships of a vanquished enemy.

I was taken by the beautiful red columns and the stark figure with the brilliant sunlight setting it off.  As always, I had my camera ready, collecting information.  I photographed from all sides but found the side shown to be most interesting.  Our travel coach, always with us and this monument provided an interesting landmark to include with other people places and things in watercolor. However, the figures in the foreground were learning about Russian history just as I did, they were borrowed from the Peterhof Palace near Saint Petersburg.  I am licensed as an artist to borrow whenever I can.  I am happy with the resulting painting.