I’m happy to say that 2017 has been one of my proudest in terms of the recognition received for the artwork that I have created.  Most recently the May edition had me entering a local show and a statewide show.  The local show, the May Show at the North Canton Little Art Gallery and the statewide show, the Ohio Watercolor Society Watercolor Ohio 2017.

The good news is that I was “juried-in” in both of them and I won a prize in the local show. The judging wasn’t as kind to me as I had hoped for in the statewide show.  But, I won the honor of my piece, 30 Rock III, traveling the state of Ohio with the road show of the Ohio Watercolor Society 2017 edition.  The show had a great beginning at the Columbus Museum of Art.  Then it is off to parts that I may never see but hope that the patrons in those parts enjoy that piece as much as I did creating it in the first place. 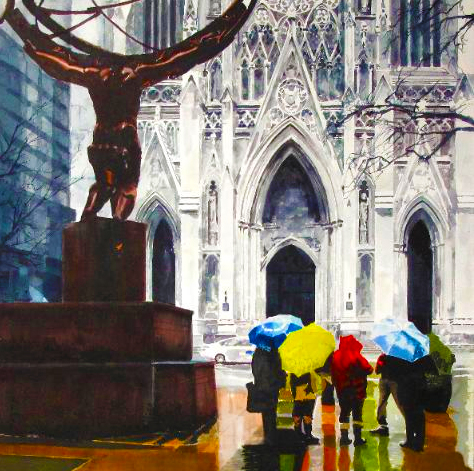 But, wait, the season is not yet over.  There is one more exhibit that is a little bigger than the May Show and a little smaller than the OWS show.  It is the Stark County Artists Exhibit at the Massillon Museum.  I’m happy to report that I was accepted this year while I was not accepted last year.  I was not eligible to enter the 30 Rock III piece since it was on the road not to be back for a year.  But my first output of 2017, Riding the Bike Lane II, is home from the exhibit in Gallery + at the 78th Street Studios in Cleveland.  It was entered via on-line portal and has been accepted.  Now the waiting for the judging begins.  Delivery to the Museum  is November 19.  I will be away on international travel until then and have reached out to a friend to have her deliver my entry along with hers.   That is a long running show and the results may not be available until 2018.  Stay tuned 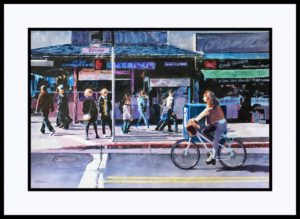