The Rush Hour series happens to be a favorite theme for me and Rush Hour V is one of those paintings.  All of the paintings feature people in landmark locations on the move or about to be on the move, in a hurry to get to the next stop.  Rush Hour V clearly represents figures and vehicles waiting to go somewhere but all are stopped because of the traffic lights present in this underpass / overpass.

The scene that inspired the painting appealed to two of my favorite themes.  Night scenes which provide for the most exciting contrasts where the darks  show off the lights thereby allowing the colors to “pop”.  The second theme is the figure in a landmark location.  This scene and the resulting painting hits on both themes.  This scene is obviously in the night time.  The location may not be known by all but it is a landmark none the less.  This is a familiar to travelers heading to Manhattan from Laguardia airport in NYC via the combination bus/subway route.  The M 60 bus stop at 31st street near Ditmars Avenue in Queens is the transfer point.  Stairs lead to the upper platform for the R train into Manhattan.   In this case three figures are either heading to work or heading home after work or something in between.  I was heading to Brooklyn to see my daughter and son-in-law in Brooklyn.  There is always a story to be told or invented with each painting.

I always admire professional photographers because they are able to compose their work in the lens of the camera.   Twentieth century photographers such as Ansel Adams and Lois Conner have created significant images of natural beauty or that of architectural detail.  I am not so fortunate.  My images are the result of random bursts of scenes that I encounter.  The resulting image that is the backbone of my artwork is a study of countless images from such bursts of the camera (see the film clip below).  Sometimes, things are added or taken away.  If a figure is needed, I can add it using my process of digital collage.  Likewise, figures or objects can be taken away or re-positioned.  In other words, the paintings are designed, they are composed in order for me to tell the story about a moment in time.

In the case of Rush Hour V the scene designed itself.  All I had to do was to select the best one from the photo burst and add a little creative license and get to work.  Of course you can tell which one I chose even though I did not use all of it.  These images were taken while I was walking and a lot of the foreground is unnecessary.  I prefer “zebra” crossings (striped crosswalks) but the ones at 31st street didn’t work as well as the ones where the figures were waiting to cross.  All in all the painting is successful in my eyes as a very strong critic of my work in process.  Furthermore, the critique group at the Akron Society of Artists seemed to find the work acceptable with no suggestions for improvement.

There is a recorded film strip of the work in process that is coming soon.  Stay tuned. 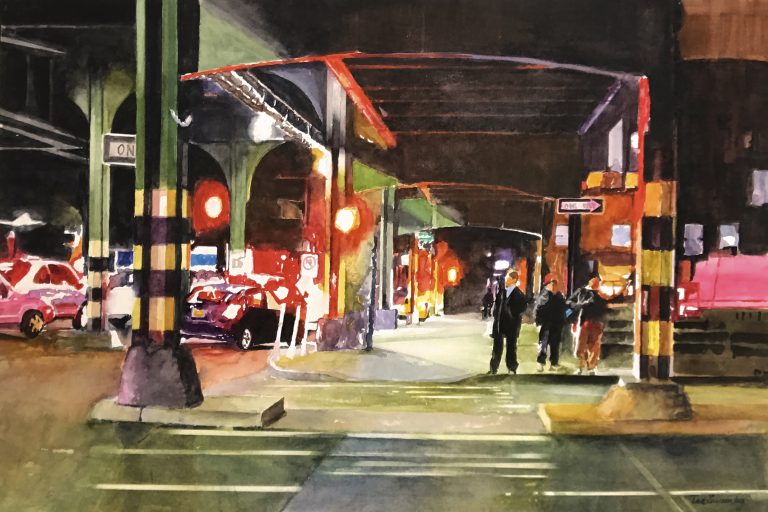