Well, the fun continues.  This is the busiest exhibit season so far.  In addition to the excitement from last week with CMA and NWS, I made another entry, wait, two more entries.  One at Group Ten Gallery in Kent Ohio and another at Ohio Watercolor Society.

The entry at Group Ten Gallery is the first time of entering a juried show there.  Group Ten Gallery has been in existence in Kent Ohio for a few year, operating as a coop gallery of ten members or owners.  Group Ten interviews replacement members as vacancies arise.  I applied to fill a vacancy three years ago and did not meet the member / owner criteria as judged by the jury of peers.  At first, I was disappointed that I was not accepted into that role but realized that I had dodged a bullet.  A weekly commitment of sweat equity is part of the ownership.  The drive and the commitment of a day a week or part of a day per week would have been exhausting.  It would have given me not time for my other pursuits of painting, golf, volunteering, exhibiting in other locations and teaching private or group lessons.  So I had not looked back until the opportunity to compete for prizes in Group Ten’s Fourth Annual Regional Juried Exhibit.  This time, I was accepted with the two pieces that I entered.  But, I was reminded of the drive to get there.

I delivered my entry pieces on Friday afternoon.  It was a rainy, really rainy day and traffic was creating such a mist on the road that it was difficult to see.  Everyone was having a time making it thought the mist which made the trip seem longer than it actually is.  It is long on any given day.  I made it to Kent but, the gallery had moved since I was there last and I had a time locating it.  Two parking meters and three trips around the block allowed me to find the place.  The new gallery is very nice BTW.  Returning home was no snap either.  My navigation app took me the long way out of town until I found a familiar highway.  It didn’t even take me back the same way I came in.

The good news from all of this is that the two pieces I entered were both accepted.  The bad news is that the opening reception is Friday and I have to go back for the award ceremony.  There is always hope of winning a prize but, they will not announce the winners until the opening night.  I would not go if I knew that I would not have a prize to accept.  I may be way too optimistic because of one of the judges, Dottie Shinn of the Akron Beacon Journal had not been a fan of my work in another exhibit that she critiqued (did not judge).  Maybe she will have a change of heart judging with another juror.  Hope so.

My premonition was correct, sort of a self-fulfilling prophecy.  There was no change in the hearts of the judges in this contest.  I was a finalist, one of the forty some odd artist with pieces for the exhibit but, I was not chosen for one of the top prizes or even an honorable mention.   But, unlike Marlon Brando in “On the Waterfront” where he said “I coulda been a contender, I coulda been somebody”.  I was a contender in this race.  I didn’t make the winners circle this time but there are more times to come.

The exhibit space is lovely, spacious and well lit.  There was plenty of food and other refreshments.  It was well attended.  Many of the artists are from the Akron area and I knew many of them although there were a lot more that I did not know.  I was lucky to see Heather Bulloch from Canton.  We were hung together.

BTW, I’ll let you know about the OWS entry in another post because it is a “two-fer” so to speak.  More about it later. 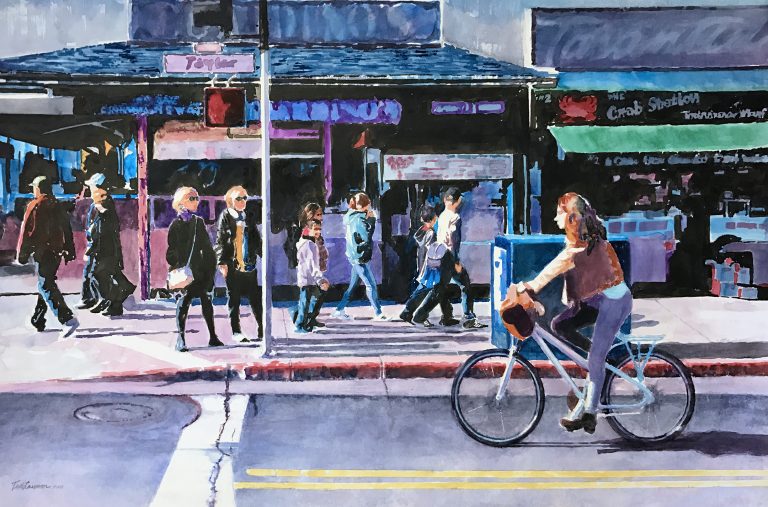